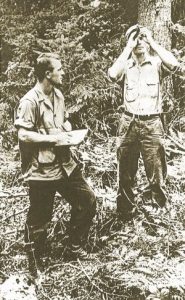 From 1910 to 1919 the department saw huge increases in enrollment until the first World War. Following the war, enrollments increased once again. Funding limited the growth of the department throughout this decade. In 1910 the Forestry Department moved to the newly constructed agriculture building (Winslow Hall). Professor John Briscoe led for the duration of this time period. The first summer camp was held in 1913 at Indian Township, Maine, and Xi Sigma Pi (Gamma Chapter) was established for honor students in Forestry on March 31, 1917.

During the 1920s, Professor John Briscoe continued to lead the department with increasing enrollments, especially with the return of veterans from the first World War. In 1923 the first winter camp was held at Indian Township, Maine. 1923 was also the year of the first publication of the yearbook – THE MAINE FORESTER. By 1927 the Forestry department became the 3rd largest on the campus of UMaine. In 1928, on the occasion of the 25th anniversary of the department, Professor Briscoe mailed a survey card to all 186 living alumni. A resounding 86% responded, with many writing letters of appreciation to him after soliciting their input and suggestions to make the department stronger. Finally, in 1929 the University took over funding and management of the department.

The 1930s brought many changes for the Forestry program. In 1931 the first permanent winter camp was established at Indian Township, ME. In 1933 Dwight Demeritt (’22) returned to head the department after John Briscoe tragically drowned in the Stillwater River. The Cooperative Wildlife Research Unit was established with C.M. Aldous as leader in 1935. The wildlife conservation curriculum was established the following year in 1936.

In 1937 the Society of American Foresters accredited the Forestry Department for the first time, and in 1938 the first Master of Science degree was conferred (Wildlife Management). The University acquires land from the U.S. Government, that became the University Forest, through the Bankhead-Jones Act of 1939.

Again war decimated the forestry department during the 1940s, with enrollment dropping to near 0 during its height. But during this time research was done at a level that was not possible while professors were instructing classes. During the war time era Professor Demeritt was a virtual clearinghouse of information to and from alumni and current students involved in the war. Many wrote and asked for updates on fellow students, or just to see what was going on back in Orono. He told them of other forestry men he had heard from along with information such as how much it snowed the previous winter, what everyone at the department was doing, who had recently stopped by, etc.

By 1946 Professor Demeritt took a position with the Dead River Company and Robert Ashman replaced him as head of the department. This happened just before the onslaught of returning veterans drove enrollment to levels never before seen. In an effort to deal with all the incoming and returning students, winter camp was moved to summer. In 1949 the Forestry Department moved from very cramped quarters in to the newly constructed Plant Sciences Building (Deering Hall).

During the 1950s the Forestry program celebrated its 50th anniversary (1953). The first female graduate completed the wildlife program in 1956, and in 1958 Albert Nutting (’27) was appointed Director of the School of Forestry.

The 1960s included some very important highlights for the Forestry Program. In 1961 McIntire-Stennis legislation was created (much of which was written on the UMaine campus) became law, providing funds from the US government for research in forestry. In 1968 a new building for the School of Forest Resources (Nutting Hall) was built.

The 1970s were another historic decade in the long history of the Forestry program. In 1970 the PhD program in Forest Resources was approved. 1972 saw Dr. Fred Knight (’49) named Director of Forest Resources after A.D. Nutting retired in 1971. 1974 was the final year of forestry field activity on Indian Township, ME by the University of Maine. The Cooperative Forestry Research Unit (CFRU) was established in 1975. In 1976 the final summer camp was held at Princeton. The 75th anniversary of the Forestry Program was celebrated in 1978 with a large gathering of dignitaries.

More major changes occurred in the Forestry program during the 1990s. In 1991 Dr. Bruce Wiersma (’64) replaced Dr. Knight as dean of the College of Forest Resources. Also in 1991 the last 2-year Forest Management Technicians class graduated. In 1993 the College was renamed and combined to form the College of Natural Resources, Forestry, and Agriculture.

The year 2003 marked the 100th anniversary of the Forestry program. This milestone was kicked off with a celebration in October, as well as with the revitalization of the Maine Forester yearbook. Also numerous upgrades were made to Nutting Hall including a  redesign of the courtyard to include a great bronze sculpture (Cub Scouts) created by Forest Hart.